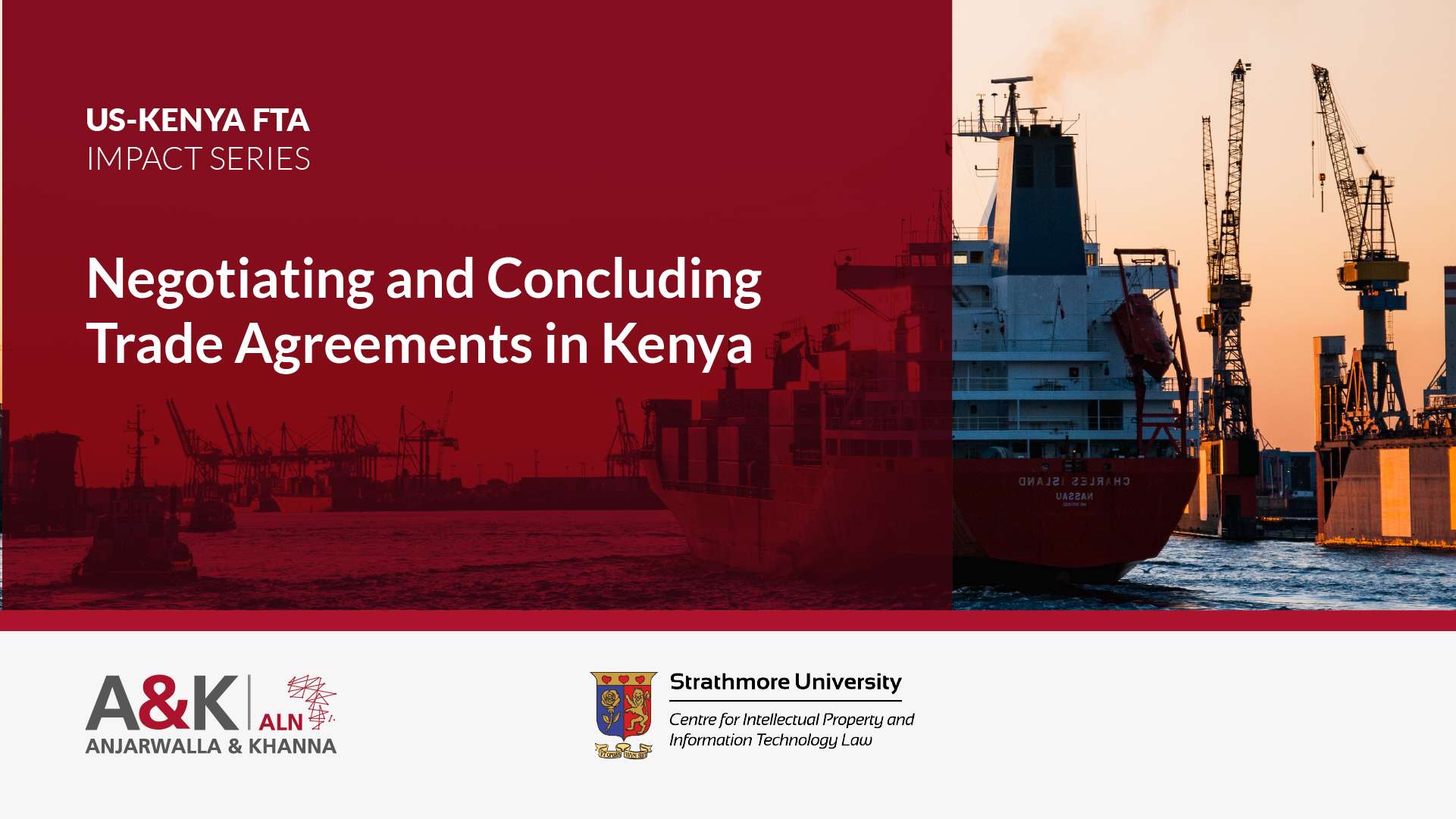 Negotiating and Concluding a Trade Agreement in Kenya

There has been a significant amount of discussion in Kenya regarding the proposed free trade agreement (FTA) with the United States (US) and how Kenya stands to benefit. We therefore sought to write a series of op-eds under our US-Kenya FTA Impact Series covering issues that surround the proposed FTA. This is the final instalment of the Series. This last article seeks to analyse the Kenyan procedural requirements for negotiation of a trade agreement, with a focus on the role of stakeholder engagement, which is essential to the legitimacy of the treaty ratification process. In particular, we analyse the engagement of three different stakeholders: civil society, the general public, and the private sector. We will also analyse the steps already taken in the negotiation process to engage these parties to ascertain whether they have been sufficient.

Given that the proposed FTA seeks to cover matters concerning two nations, it meets the above definition. The Act goes ahead to lay out the procedure that the finalisation of such an agreement must follow, that is, initiating the treaty-making process, obtaining the approval of Cabinet, transmitting it for consideration by the National Assembly and ratification.

Under the treaty-making process, the Executive is charged with the task of initiating, negotiating, and ratifying the treaty. This responsibility is further delegated to a relevant state department which, in this case, is the Department of International Trade, which is responsible for the management of Kenya’s international trade relations and the promotion and protection of its interests overseas, including the formulation, implementation, coordination, monitoring, and reviewing of international trade policies.

Civil Society Organisations (CSOs) in Kenya have played a significant role in democratic governance. They have guided the State's democratisation process by mediating between people and the State and, therefore, creating a conducive environment for inclusive growth and participatory democracy.

The role of CSOs in trade agreements such as the US-Kenya FTA is ensuring that the public interest is met. Public interest issues may include developmental concerns, the potential abrogation of the rights of citizens, protection of the interests of small-scale industries, amongst others. For example, CSOs such as the Kenya Legal and Ethical Issues Network (KELIN) have submitted their input on the US-Kenya FTA. Another example is the Kenya Small Scale Farmers Forum (KSSF) which has remained active in pushing for further public participation in the negotiation process of treaties related to international trade.

The above interactions between the CSOs and the State Department of Trade highlight both the efforts made to facilitate engagement of key stakeholders during the negotiation process and the shortfalls of the same engagement. An instance of such a shortfall is the absence of specific guidelines or procedures on the engagement process on the State Department of Trade’s website. Without such guidelines in place, the general public tend to remain unaware of the progress of negotiations, and whether their input was adopted. For example, with the change in administration in the US, it is unclear what the timelines for completion of the negotiation will be. While some reports indicate that the two countries are on course to conclude the FTA, others suggest that the US would like to delay the process until the expiry of the African Growth Opportunity Act (AGOA) is nearer. AGOA is due to expire in 2025 and any negotiations conducted against the backdrop of Kenya not having the preferential access it has under AGOA may inadvertently result in Kenya making concessions in order to restore their access to the US’s markets. With a possibility of the US’s agenda being recast in light of a new administration, it is only prudent to ensure that all stakeholders have the relevant information on how their input can be received, and at what point negotiations are at.

Given a lack of data regarding the process, we are unable to discern the State Department’s progress, including whether the efforts are sufficient and whether the principle of transparency as envisioned under article 233(1) of the constitution has been achieved. We would expect that the State Department will in due course provide a policy statement outlining:

Public participation in the treaty-making process

The Cabinet’s approval of the treaty and subsequent submission to Parliament is governed by the Statutory Instruments Act, 2013. Once the final text of such a bilateral agreement is concluded, the government signifies its intention to be bound by issuing a Legal Notice. The Statutory Instruments Act defines this Legal Notice as a statutory instrument and gives the Cabinet Secretary a period of 7 days to lay it before Parliament for scrutiny. A failure to do this would lead to the invalidation of the agreement as was the case with the Double Taxation Agreement Kenya recently concluded with Mauritius.

In an attempt to avoid the aforementioned problem, the High Court of Kenya has established that the “National Assembly and Public Institutions have a broad measure of discretion in how they achieve the object of public participation. How it is affected will vary from case to case but it must be clear that a reasonable level of participation has been afforded to the public.”

The question is, what is a reasonable level of participation? In Tax Justice Network- Africa v Cabinet Secretary for National Treasury & 2 others [2019] eKLR the High Court observed that if certain relevant organisations or bodies were engaged, this would meet the threshold discussed above. It is not enough for a petitioner to simply assert an absence of participation without clearly indicating the sections of the public which were excluded.

To avoid the above issues listed, public participation efforts should be conducted at the same time as the negotiations at the onset of the treaty making process.

The Kenya Private Sector Alliance (KEPSA) has the mandate to champion the interests of the Kenyan private sector in trade, investment, and industrial relations. KEPSA has announced that it has formed a consortium, the Kenya Private Sector Consortium/Working Group (PSWG), to engage some if its most active players with regards to the US-Kenya FTA Proceedings (e.g., the American Chamber of Commerce, Kenya Association of Manufacturers, Kenya National Chamber of Commerce and Industry, Kenya Healthcare Federation, and Agriculture Sector Network) and selected experts from the sector.

The above initiative shows that KEPSA and the Government have taken important steps to ensure the participation of private parties in trade policy. It is important to note that KEPSA is the co-chair of the National Trade Facilitation Committee for the WTO. In fact, the government’s efforts to solicit views from the private sector are well documented, for example just in February of this year KEPSA held a roundtable discussion with government officials from Kenya and the US to discuss the FTA. It is however vital that the government pays attention to the interests of the general public as well for a more balanced view on the process.

There are several facets of participation in trade policy, that is, civil society engagement, public participation, and private sector participation. To ensure that a trade policy such as the US-Kenya FTA is good for Kenya, we must engage all parties to come up with an well rounded FTA that facilitates the interests of several groups.

The government’s interaction with the private sector reveals its ability to facilitate broad participation in the treaty-making process. This capacity should be extended to the general public through facilitation of a more meaningful and substantive public participation process.

We urge the State Department of Trade to release guidelines that prescribe protocol on the engagement of civil society, the public, and the private sector on the US-Kenya FTA. The specificities attached to operationalising this engagement would be at the State Department’s discretion. Whatever the case, the establishment of a viable mechanism for engagement will ultimately benefit all parties as the FTA will take into consideration the interests of all the parties involved.