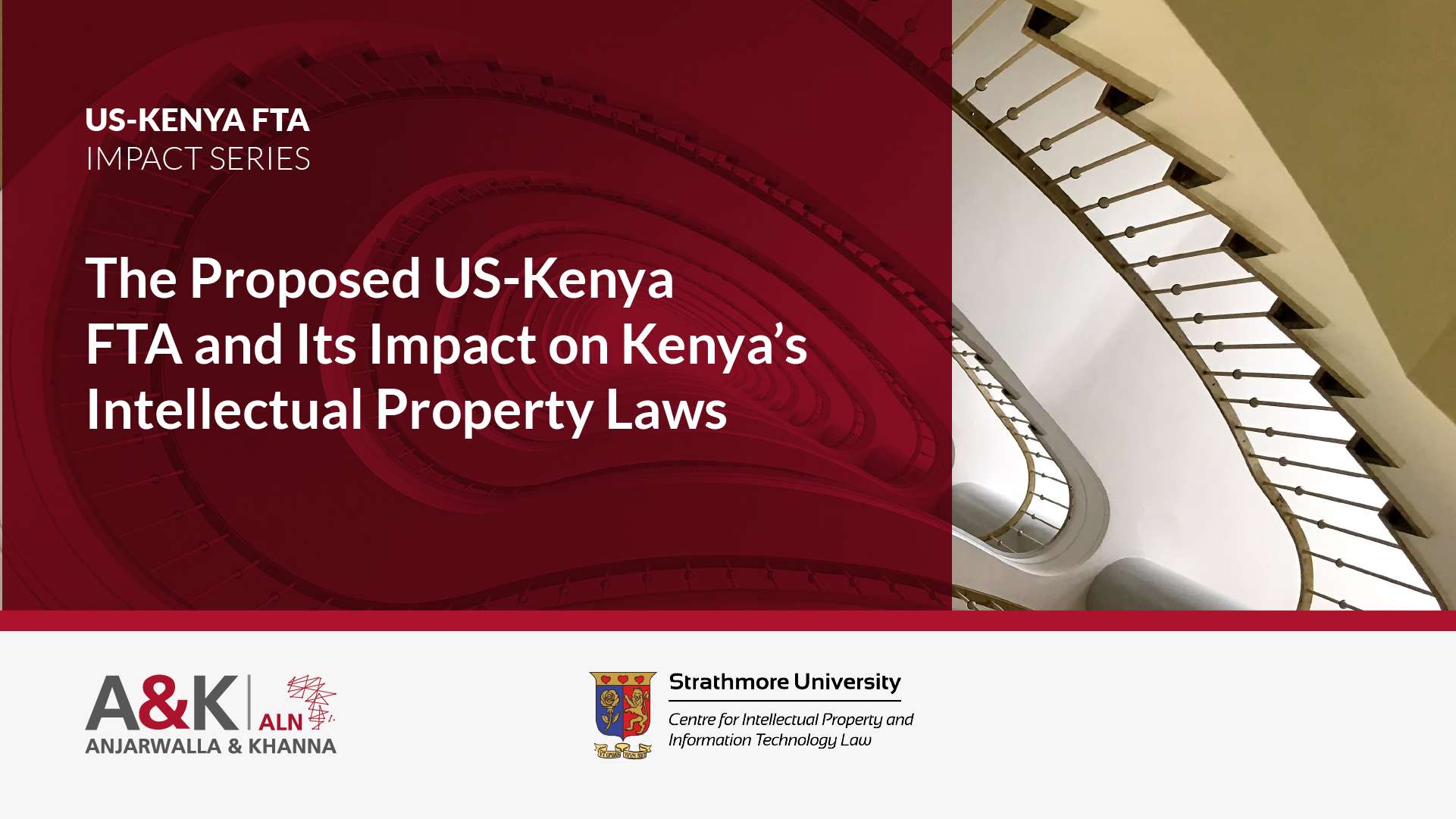 In March 2020, the United States (US) and Kenya officially made known their intention to negotiate a bilateral free trade agreement (FTA). The first phase of the negotiations was announced on 8 July 2020 proceeding virtually over a period of about two weeks.

Both Kenya and the US have released their respective negotiating objectives. These documents discuss, at length, what both countries wish to pursue and realise through the FTA, including with regards to intellectual property (IP).

The protection and enforcement of Intellectual Property Rights (IPRs) by the US to standards that mirror their domestic laws is a longstanding component of their international trade policy and trade negotiating objectives. This is especially significant given that IP is territorial.

IP features heavily in the negotiating objectives laid out by the US. The Kenyan objectives also make mention of IP but in less detail. Aspects of IPRs usually covered by US FTAs include, among other things, the extension of copyright terms; the expansion of patents rights’ coverage and geographical indications; and, importantly, a call for minimal government intervention in the enforcement of these rights.

Under the World Trade Organization’s (WTO) multilateral framework, trade in IPRs is governed by the Agreement on Trade Related Aspects of Intellectual Property Rights (the TRIPS Agreement). This Agreement, in relation to the main areas of IP, sets out the minimum standards of protection to be provided by each Member country and certain general principles applicable to IPR enforcement procedures. The Agreement also provides for dispute settlement under the WTO dispute settlement procedures.

There has been considerable debate globally as to whether the TRIPs Agreement, and the IP protections therein, act as the floor or the ceiling; the bare minimum or comprehensive coverage.

Most Developing and Least Developed Countries argue the latter. Developing countries such as Kenya believed the TRIPS Agreement should be the last multilateral effort to regulate IPRs and, in agreeing to TRIPS in exchange for several concessions, hoped that they would succeed in preventing developed countries from pursuing their own unilateral and bilateral practices against them.

On the other hand, developed countries viewed the TRIPS Agreement as nothing more than the start of a more heavily regulated global market for IPRs. As a result of this belief, these developed countries have pioneered a new development in the international regulation of IPRs from the multilateral level to a one-to-one system evident in the growing number of bilateral trade agreements between developed and developing nations.

From TRIPS to TRIPS-plus

Kenya and the US both adhere to the standards set out in the TRIPs Agreement. However, when it comes to FTAs, the US has a proven track record of building on the content set out in TRIPs; that is, seeking TRIPS-plus provisions. These provisions include copyright term extensions, patent term extensions and periods on data exclusivity.

The potential economic burden of TRIPS-Plus provisions coupled with the limitations they could place on access to IP in Kenya should be carefully considered, particularly because Kenya imports more IP than it generates. Therefore, as a net IP importer, provisions such as a copyright term extension could place limitations on Kenya on accessing copyrighted material for research and education for an additional period. Additionally, patent term extensions and providing for data exclusivity periods could affect access to medicines in the country.

If a TRIPS-plus approach to this FTA is applied, which seems likely with reference to the negotiation objectives set out by the US, Kenya should consider whether it would have the effect of eliminating some of the flexibilities that this multilateral agreement assured to its members in pursuit of universal access to medicines.

Concern has already been expressed by several Kenyan civil society organizations (CSOs) that a TRIPS-plus FTA could hinder access to medicines in a country with a large population of persons suffering with diseases like HIV/AIDS and tuberculosis. TRIPS-plus standards in the FTA could mean higher prices on medicines and limitations on competition from generic products.

In response to the United States Trade Representative’s (USTR) call for comments, CSOs such as KELIN, Pamoja TB Trust, and the Kenya Network of Cancer Organizations stated that given Kenya’s level of economic development and continuing dependence on donors to deal with its health problems, there should be no new, longer, or stronger monopolies on IP protection in the agreement.

When this is taken in light of the fact that the US has indicated its intention to utilise this FTA as a blueprint for other trade deals in Sub-Saharan Africa, the importance of careful negotiation on Kenya’s part is amplified. If indeed TRIPS-plus provisions are included in the FTA, and this is replicated across the continent where 68% of people living with HIV/AIDS reside, it may mean further difficulties with respect to access to medicines.

Whereas some have argued that such provisions in FTAs are often heavily economically-oriented, the parties ought to ensure that their negotiations transcend purely economic goals and factor in citizens’ well-being. This would be in the interest of both countries: achieving a balanced FTA would boost the US’s reputation and credibility across the world, and more so at a time when the world is reeling from the effects of the COVID-19 pandemic. This view is bolstered by news that the US is supporting a proposal to temporarily waive IP protections over COVID related innovations such as the vaccine.

Issues to do with IP and access to medicines are often contentious and previous agreements have failed over these issues. For example, in 2004 the negotiations between the US and the Southern African Customs Union (SACU) to conclude an FTA broke down when SACU countries would not accept the demands made by the US regarding IPRs. Amongst the reasons cited for this failure to launch was that the pursuit of extensive IPRs by the US would compromise South Africa’s ability to provide medicines to the region’s sick people. The contention that arises with IP and access to medicines has, in other cases, resulted in the exclusion of provisions relating to IP altogether from trade agreements. This was the case in the Trans-Pacific Partnership Agreement (TPPA) which was signed in 2018.

Both the breakdown of the US-SACU negotiations, and the exclusion of IP in the TPPA represent extreme outcomes. These outcomes, however, demonstrate the importance of negotiating parties meeting each other half-way and adequately communicating their vested interests. In approaching negotiations on the IP chapter of the US-KE FTA, Kenya ought to first consider what would be in the best interest of a majority of its citizens and detail these interests clearly in its summary of negotiation objectives as the US has done. It is also imperative that it analyses how the FTA would affect its neighbours, other trading partners and its existing obligations as regards the East African Customs Union and the Africa Continental Free Trade Area Agreement in the long run.